Back in 2013 I decided to participate at the DV lottery, and thanks to a series of lucky strikes I was able to get my Green Card in September 2015! This post contains information that can be useful for people that are going through the same process. In particular with this post I’d like to give others some statistics and insights about the numbers that are pulled through the process.

When are they going to call your number?

What is the Green Card

The Green Card is a document that grants to its holder the authorization to live and work in the United States on a permanent basis. As proof of that status, a person is granted a permanent resident card, commonly called a “Green Card”. The Green Card can be obtained in several ways. Most individuals are sponsored by a family member or employer in the United States. Other individuals may become permanent residents through refugee or asylee status or other humanitarian programs. In some cases, you may be eligible to file for yourself.

An alternative way of being granted a Green Card is the Diversity Visa (DV) lottery, also known as the “Green Card lottery”.

The Diversity Immigrant Visa Program (DV Program) makes up to 50,000 immigrant visas available annually, drawn from random selection among all entries to individuals who are from countries with low rates of immigration to the United States. The DV Program is administered by the U.S. Department of State (DOS). 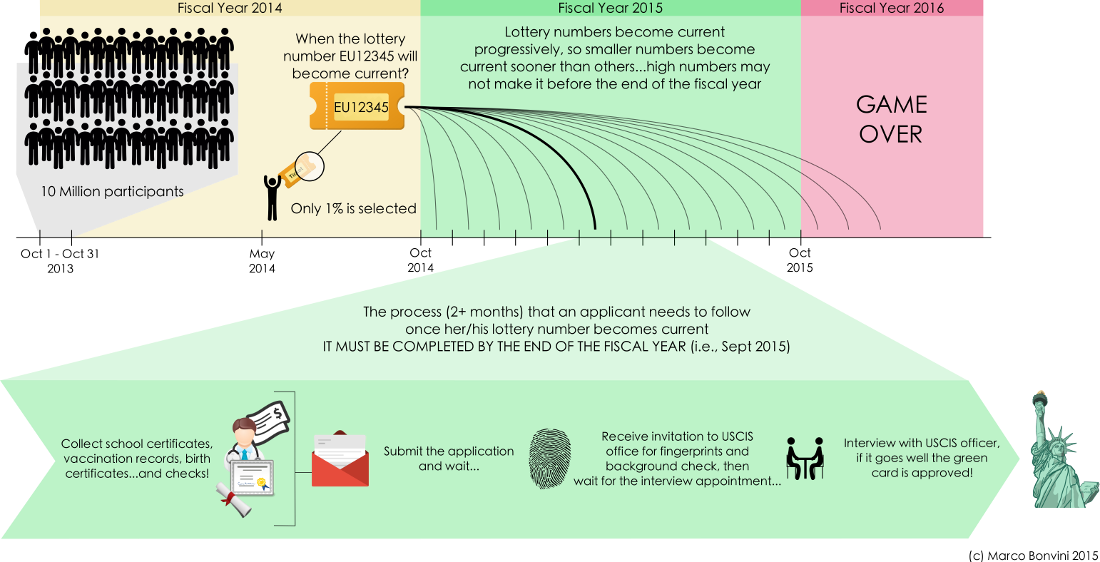 Every year about 10 millions of people take part in the DV lottery, and approximately only 150 thousand of them are selected. The selected candidates receive a DV lottery number (between 1 and 150000). This number determines when and if they’ll be able to get their green card. How does it work? Every month the DOS releases the so called visa bulletin. The bulletin states which of the numbers will be processed in a specific month. A number that can be processed by the DOS is called “current”.

Alice applies to the DV lottery for fiscal year (FY) 2015. She applies together with other millions of people from all over the world in October 2013 (one year before the fiscal year will start). After applying, she waits until May 2014 to discover that she is one of the lucky selected candidates. The probability of being selected was about 1% – good job Alice!

Alice receives a notification of acceptance that contains a number. In her case the number is 12345. Also, this number belongs to a specific group, the European group because Alice was born in Spain.

In October 2014, exactly one year after Alice and the other lottery partecipants applied, DOS starts reviewing the candidates who were selected. If all the thousands of selected candidates were able to go to the DOS offices from the first day, it would be chaos! For such a reason, DOS starts processing only candidates that have very low numbers. But what should Alice do? When will she be allowed to go the DOS offices?

Each month the DOS releases a document called “visa bulletin”; this document states which of the candidates are allowed to be processed by DOS. The bulletin is made available a couple of months in advance with the respect to the month which it refers. For example the visa bulletin for October 2014 is published in mid August 2014.

When the bulletin is published it states that DOS will process candidates with numbers lower or equal that 8000. Because Alice’s number is higher she has to wait. Every month she will check the bulletin and eventually she’ll discover that she can finally go to the DOS offices.

Remember that the DV lottery selects more candidates than the places actually available! This means that someone, hopefully not our friend Alice, will never be called because all the available green cards have been given to other candidates with lower numbers.

Long story short, candidates like Alice (and me…) typically have no clues when their numbers will be processed, or if they’ll be processed at all!! Different websites providing a lot of different data and statistics, unfortunately not many of their data are actionable… For example www.green-card.com provides statistics of how many people from a specific country were selected in the last decade. This kind of information is a bit useless, moreover, it is presented in a very unconvenient table-based format.

When it comes to winning the DV lottery you really need two things, being lucky and being organized.

What do I mean with actionable information?

“Actionable information” is something you can use to make a decision.

During my experience with the DV lottery I found a bit frustrating receiving a number and not having a clue whether DOS would call me or not. I knew my number was high and there was a chance of not being called but how probable was that? Also, in case I had a chance, when did I have to start preparing all my documents and records? For example some documents are tricky. The medical records and vaccinations need to be renewed less than one month before you submit the application. An other tricky aspect is that if you’re already in the US with a non-immigrant type of visa (e.g. J1, J2,…) you should not leave the country one month before submitting the application, or during the application process.

Again, knowing when you’re likely to start the whole application is very helpful to be prepared at the right moment and avoid last minute decisions.

The plots below show some statistics generated using data gathered from the DOS website regarding the DV lotteries from fiscal year 2003 until fiscal year 2015. Because the DV lottery participants are divided by continent of origin, each continent has different statistics. You can use the buttons to select the continent you are interested in. Once you selected the continent, enter you DV lottery number in the box below the plots. After entering the number, click the search button and the plot on the right will tell you how likely your DV lottery number is to be called in a given month of the fiscal year. In general the lower the number the higher the probability that you’ll be called soon.

This is what I call “Actionable information”. You know your stakes, take your decision! But remember, be done by the end of September otherwise you’re out…

If you’re interested in how these numbers have been generated please have a look to my GitHub repository mbonvini/GreenCardLottery. The script contained in the repository gathers information about the visa bulletins from fiscal year 2003 until 2015. With such data then I computed some statistics, exported them as JSON files, and used them to generate plots (using D3.js) and predictions.