Modelica in action: how to structure models in packages

If you work with Modelica you should be familiar with packages. Packages are a way to organize and structure your models. In this post I will show how to structure your models in a package. The post is accompanied by an example that is included in the Github repository ModelicaInAction.

If you have a look at the Modelica Standard Library MSL you’ll notice that it’s a collections of models and functions structured in packages. The same is true for all the other Modelica libraries.

Packages can be defined within a single *.mo file, otherwise they can be a collection of folders and files. Using folders and files is generally the best approach because it’s easier to manage many small files rather a very large one, also, it’s easier to track changes using a version control system, especially when working in a team.

The folder modelica that is included in the ModelicaInAction repository contains a package called SimpleElectrical.

The package contains a collections of models representing basic electric components. Most of the components in this library were introduced in this article SW engineering meets mathematical modeling - Types and Objects

The repository is named SimpleElectrical and it’s located in the folder ModelicaInAction/modelica/.

Packages can contain other sub-packages. A good design principle is to group models that have similar characteristics in sub-packages. For example in our case the SimpleElectrical package contains four sub-packages

The Modelica language specification doesn’t prescribe how packages should be called, however the names I used are a de-facto standard when working with Modelica libraries.

Anatomy of a package

Let’s have a look at the code inside the files in order to fully understand how packages work. At the top level we have the following structure of files and folders

We know that the package contains four sub-packages, and each one is represented by a folder. A Modelica tool that visualizes the hierarchy of models and packages needs to know in which order display them. This is the role of the file SimpleElectrical/package.order. The file contains an ordered list of the sub-packages contained by the root-level package.

So far we’ve seen the structure of the top level package. But how do sub-packages work? Let’s have a look at the sub-package Components.

In this case Components is a sub-package, therefore the first line states that it is part of the parent package SimpleElectrical. The following lines declare the sub-package. The models contained in this package are the remaining *.mo files. Let’s have a look at Source.mo.

The first line declares that this model is part of the package SimpleElectrical.Components, while the following lines declare the model. Again the name of the model matches the name of the file in the file system.

As we have seen before, the folder contains a file called package.order that defines the order of the models within the package. The content of SimpleElectrical/Components/package.order is

OK, now that we know everything about packages and their structure, let’s see how to use the models they contain. For example we’re interested in simulating the model SimpleElectrical.Examples.RC that is defined in the file `SimpleElectrical/Examples/RC.mo**.

In order to simulate the model we have to inform the compiler of the existence of this new library SimpleElectrical. This can be accomplished in two ways:

that adds the path /home/docker/modelica to the environmental variable MODELICAPATH. Thanks to this the compiler will be able to automatically find the package SimpleElectrical.

and plot the results as usual 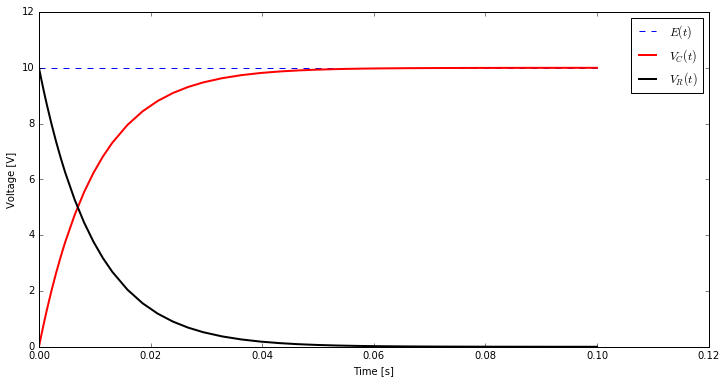 After having seen all the nice features provided by Modelica, in the post titled SW engineering meets mathematical modeling - Types and Objects. we have finally learned how to actually use them.

In particular we learned how to structure Modelica models in packages, a bit of naming convention for packages, and access and simulate models inside packages using JModelica.

All the code is part of the repository ModelicaInAction. If you have questions regarding these examples please feel free to leave a comment or submit an issue/pull requesto on Github.