In the last posts I explained why Modelica matters and some of the features that make Modelica a great language for modeling dynamic systems. In this post I focus on some practical aspects, namely how to setup the open-source JModelica platform and how to compile and simulate Modelica models. The post is accompanied by a Github repository called ModelicaInAction. This repository contains all the code and the instructions needed to setup JModelica and running the examples.

In this demo I use JModelica.org, an extensible Modelica-based open source platform for optimization, simulation and analysis of complex dynamic systems.

Installing JModelica is a lengthy process because it depends on many external and third party packages. To ease the installation process I created a Docker container with installed everything that is needed to run the examples.

In case you wonder what’s a Docker container

Docker containers wrap a piece of software in a complete filesystem that contains everything needed to run: code, runtime, system tools, system libraries – anything that can be installed on a server. This guarantees that the software will always run the same, regardless of its environment (see https://www.docker.com/what-docker for more info).

In this case I created a “recipe”, also known as Docker file, that describes how to build a container with installed everything that’s needed to start using JModelica.

Once created and started, the container and your OS will interact as shown in the following image. 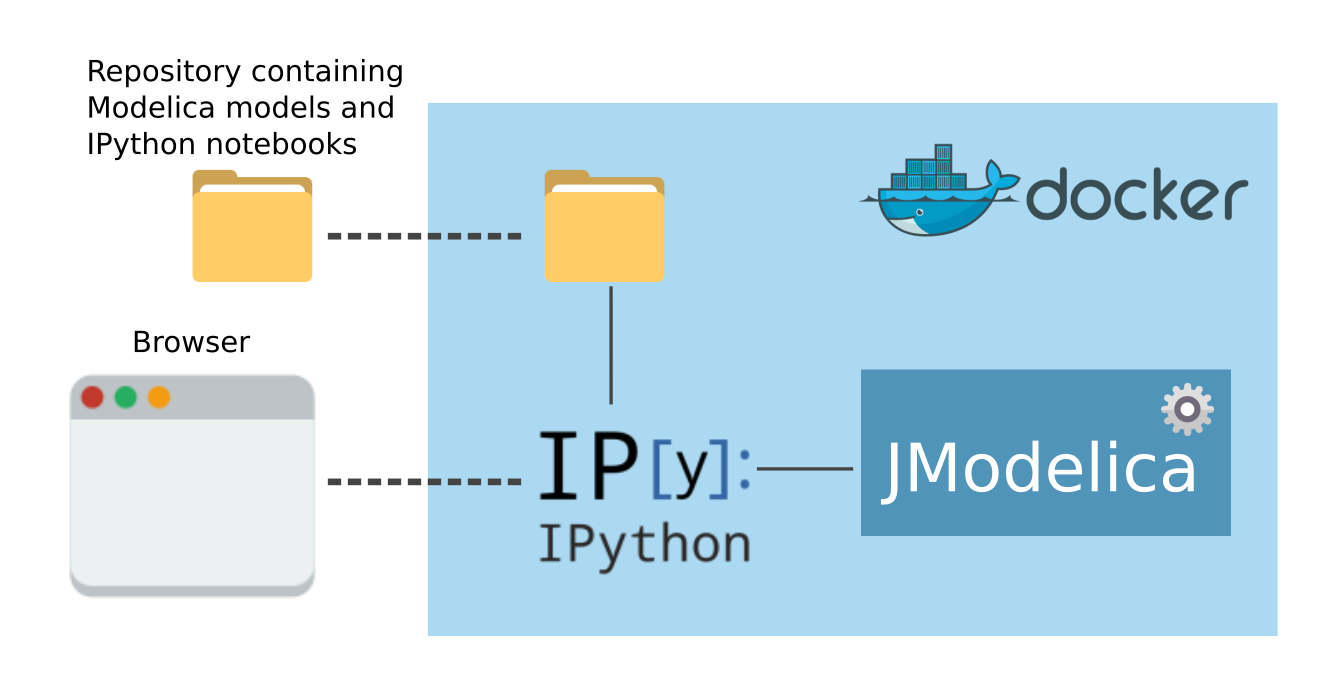 Once you connect to the IPython server that is available at localhost:8888 you should see something like this

For a detailed explanation on how to download and start the Docker container please refer to the README.md file on Github.

Compile and simulate a model

In this first example we will learn how to compile and simulate a model. To keep the complexity as low as possible we’re going to simulate the HelloWorld model I introduced in this post about Modelica basics.

Please note that all the code referenced in this section is part of the IPython notebook HelloWorld.ipynb .

The model to simulate is defined in a file called HelloWorld.mo that is located in the modelica folder that is part of the ModelicaInAction repository. The content of the file is the following

To compile the model we use the following instructions

The binary file createed by JModelica is an FMU (Functional Mockup Unit). An FMU is a file compliant with the Functional Mock-up Interface (FMI). FMI is a tool independent standard to support both model exchange and co-simulation of dynamic models using a combination of xml-files and compiled C-code.

TL;DR, JModelica generates C-code that is boundled together with an xml representation of the model. Both the C-code and the xml-files are packaged inside the FMU.

The next step is to take this FMU and run a simulation.

The function load_fmu(...) loads the FMU and returns an object that represents a generic simulation model. Such simulation model object has many methods and one of them is simulate(...). The simulate method links the C-code representing the model to numerical ODE integrators such as CVode (or others solver that are part of Sundials) and runs a simulation.

The simulate(...) method returns a result object containing the values of the variables in a dictionary-like structure. In this case we plot the value of the state variable x versus time. 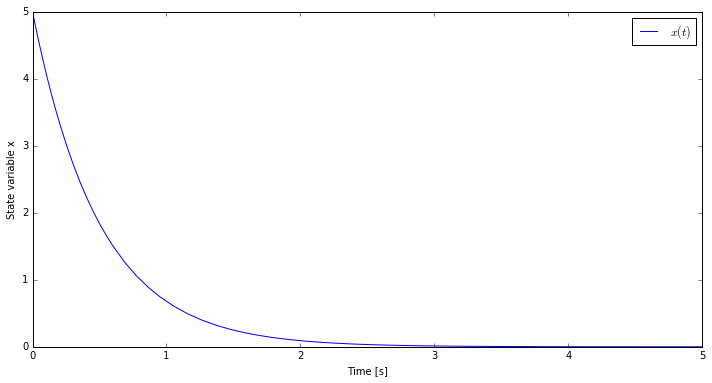 We can do more that simply simulating the model, for example we can re-simulate our model starting from tens of different initial conditions. If we take a look at the model we can see that there is a parameter x_init, that is the value assumed by the state variable x at the beginning of the simulation. Therefore, to simulate the model from multiple initial conditions we have to change the value of x_init. The following code snippet shows how to simulate the model for multiple values of the parameter x_init and saving the result of each simulation. A small note, because the model has already been simulated to run a new simulation we need to reset the model. To reset the model we use the reset() method.

The result of these simulations can be plotted and as expected even if the state variable x starts from different initial conditions it always converges to zero in the same time. 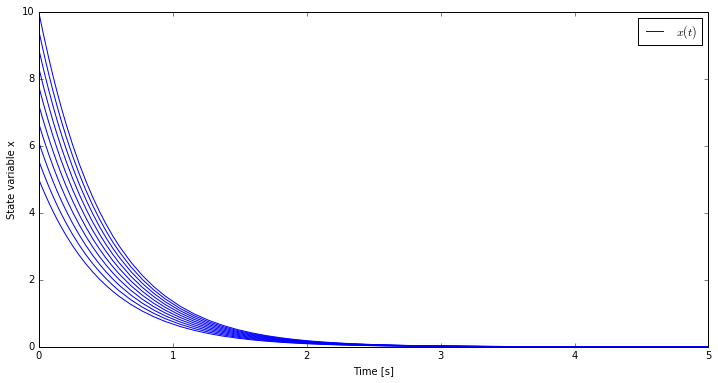 After describing all the nice features provided by Modelica, in this post we finally compiled and simulated our first model!

I also introduced this new repository ModelicaInAction. The purpose of this repository is to provide the readers an environment where they can test and run the models and examples described in my posts.

We just scratched the surface of what can be done with JModelica. In the following post I will show you an other pratical tip: how to organize models in packages.